Marex 320 Aft Cabin Cruiser has many of the same solutions as the successful multi award winning Marex 370 Aft Cabin Cruiser. The 320 Aft Cabin Cruiser is a scaled down 370 ACC, in both style and layout. We have kept the neat aft-cabin design. It is a family boat, that was designed to suit the needs of both – a small and large families with ingenious functionality. We’ve have identified the most important needs for a family when they spend a longer holiday on the water: High spaciousness headroom, big beds, spacious washrooms with shower facilities, a large seating area with connecting galley and a wide side deck walkway. The smart canopy solution is very easy to operate. Marex 320 ACC is family’s summer house. We are particularly proud that the boat was in the year 2013, similar to its big sister 370, also awarded European Motor Boat of the Year and European Powerboat of the Year.

WINNER | MOTORBOAT OF THE YEAR AWARDS 2013

Motor Boat & Yachting is one of Europe's best motorboating magazines. It's also the oldest, with a history dating back to 1904. Their long experience makes their boat tests one of the most authoritative in the industry.

WINNER | EUROPEAN YACHT OF THE YEAR 2013

A famous award which is judged by journalists from 11 largest boating magazines, with each of them having tested the boats beforehand. The prize is always awarded at the biggest European boat show - Boot Düsseldorf.

The best Norwegian boat journalists from magazines like Båtmagasinet, Vi Menn Båt, Båtliv, Seilas , Seilmagasinet, and freelance journalists, awarded Marex 320 ACC as the Motorboat of the Year in the class of boats over 25 feet. According to the jury the 320 ACC won the award because it revolutionised a much beloved aft cabin concept and adapted it to the new requirements of the modern user.

Adriatic Boat of the Year award is given at the annual Internautica Boat Show, which is the most important event in the Adriatic region.

FOR A 32FT BOAT, THIS MAREX HAS SUPERB STORAGE THROUGHOUT THE BOAT. SPACIOUS STORAGE COMPARTMENTS MAKING FULL USE OF OTHERWISE WASTED SPACE AND LEVELS OF STORAGE THAT WILL AMAZE YOU.

THE COCKPIT OF THE 320 HAS SEATING UP TO 8 PERSONS, COMFORTABLE AND SPACIOUS SEATING FOR THE WHOLE FAMILY. SIX BERTH POTENTIAL: THE AREA ON TOP OF THE AFT CABIN CAN EASILY BE USED AS A LARGE SUNBED OR DOUBLE BERTH.

THE BOAT HAS A HUGE DOUBLE BERTH IN THE FORWARD CABIN ALMOST CIRCULAR (2.1M) IN DIAMETER AND THREE BEDS IN THE AFT CABIN. THE PRIVACY YOU GET WITH THIS LAYOUT IS UNBEATABLE IN A BOAT THIS SIZE. BIG WINDOWS THROUGHOUT THE ACCOMMODATION OFFER GREAT VIEW OUTSIDE. 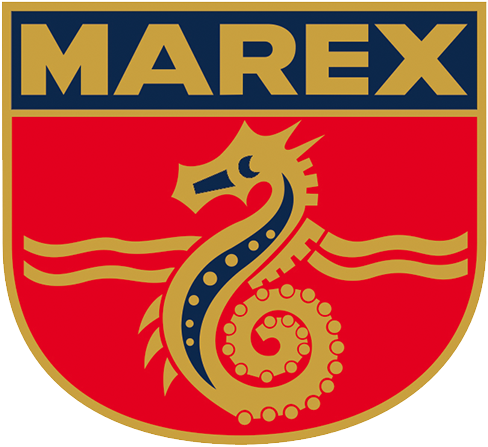 King of the Sea